My RV Solar Panel Layout was done wrong nearly five years ago... but, I finally realized it... and fixed the problem.

Those panels had been up there, on the roof for more then four years, just making watts and layin' around in the sun... with no one, not even me, realizing that I'd installed 'em wrong.

Yup... I put 'em in the wrong place. How-some-ever, 'cause of how well the things work, it took me a long time, and a good amount of bad weather, to come to understand the error.

Way back when I installed those Solar Panels, the plan had been for no less than double what I've got and maybe triple.

And to tell the truth, I believe I was thinking that I'd be putting enough of those solar panels up there, that I'd make more power then I needed, and not have to be much concerned with their total efficiency.

The result of that, Bad, thinking came to light because of the rough patch our finances went through as the world economy took a dump... and hit us personally, purty gol' durn hard. Those additional panels I'd planned on, haven't ever materialized.

We've been living with just the pair of big Kyocera panels with a total theoretical output, with ever'thing perfect, of 260 watts.

Now... the thing I did when I installed that improper RV Solar Panel layout, was, I put 'em too close together, thinking Iwas NEVER gonna tilt 'em to achieve the best winter time production. I wouldn't need to... if I had those other three or four panels!

But this past year, with all the bad weather I came to need everything those panels could produce... so the improper RV Solar Panel Layout I'd done... became a problem... If you tilted the outboard panel, it shaded a couple inches of the edge of the inboard panel... and that would basically, shut off that panel... 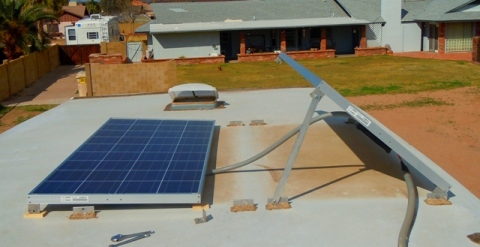 It doesn't show in this pic (The trailer is oriented more north/south) while the sun was going east/west :) but that panel on the left would be shaded along the edge that ran between the two panels... when we're camped and we normally orient the rig east to west.

Luckily, the fix wasn't an especially difficult task... which is good for me... since I've just not got much ambition these days for intense difficulties! :)

To remedy the situation, as simply as I could, I took the solar panels loose. Took two pieces of aluminum angle and bolted them, one across the bottom of each end, tying the frames of the two panels together.

... effectively, putting them into one large, single, tilt-able panel. 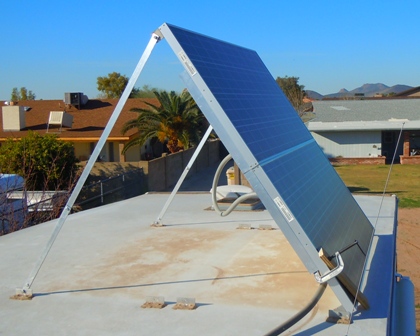 Then to finish up correcting my initially wrong, RV Solar Panel layout, I moved the roof mounts around to fit the new and proper layout... and... created a pair of Struts to hold the panels up at what I calculated to be a good angle for catching the winter sun.

It would have been simpler to not have been thinkin' so lazy in the first place... and either properly spaced the panels when I first installed my RV Solar Power System... or... built 'em then, into a single, tilting rack...

Just another demonstration that you can, indeed, Teach Old Dogs New Tricks! :) ... or... how to properly install an RV Solar Panel Layout...